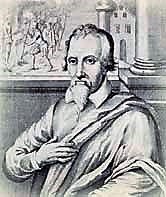 During the historical period in which urban fratricidal struggles occurred in the Valencia, end 14thc. / beginning 15thc. and faced two noble factions with corresponding supporters; a famous incident occurred on March 21, 1407; inscribed into history by its social significance, led to numerous speculations: The Murder of the Governor of the City D. Ramon de Boil Dies in 1407. Ramon Boil Díez was a high aristocrat, son of Pedro Boil Castellar, belonging to the Boil House in its branch of Bétera; Lord of the baronies of Boil and Bétera and Governor of Valencia between 1393 and 1407. In addition, Don Ramon was supporter of Vilaragut family, and according to the chronicles, was killed by order of his rival Juan Pertusa noble supporting the Centelles Family,  young man, also from a noble family, but of a second category, who enjoyed drinking, gambling and had a great reputation as lady’s conqueror; having a quarrelsome and boastful character.

Don Ramon was considered a great man in the City of Valencia, whose fame grew by the leadership exercised in an armed responding the Torreblanca Looting, attacked by berberis corsairs, that an important booty was taken, hundred prisoners and Torreblanca Custody with The Sacred inside. Don Ramon commanded Boïl family, leading an armed navy fleet chasing them to the city of Tedeliz in the kingdom of Tremcen (now Dellys in Algeria), besieging, burning the city and recovering booty, prisoners and Custody with Sacred Host.

Apparently, booth, Don Ramon and Juan, shared the same lover lady favours, Na Florentina, who gave herself to Don Ramon for money and social position and Juan because he was young

, attractive and womanizer. Florentina, jealous of the wanderings of her young lover Juan, confessed him one night that twice a week she was visited by D. Ramon de Boil and Juan fell prisoner of jealousy; because it was one thing that Florentina would make him horns and another thing doing so also with his political adversary. In addition, Florentina, senselessly he said “… if the governor knew about us, he would send someone to kill you …”, knowing that the old aristocrat was taciturn, unforgiving with his enemies and with his position could take revenge on them on behalf of the law. 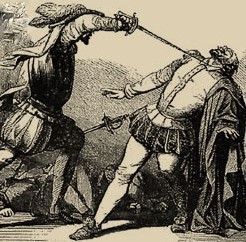 Juan de Pertusa began to observe the movements of D. Ramon from his home (near by the Palacio del Temple), close to the governor’s residence, watching Governor going to his appointment two afternoons a week, to home their shared lover lady. Several times Juan was tempted to cut him off Don Ramon and stab him, but the opportunity presented itself when Berenguer Reixac, also in favor of the Centelles and hating D. Ramon, aware of his intentions, he offered to liquidate and pro 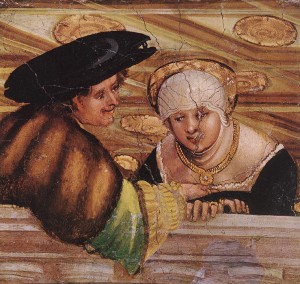 vide Juan an alibi in exchange for a certain amount of gold florins and a ticket to Genoa. The plan was that the night of March 21, Juan convoke a card game with several players, which lasted until early morning, when a servant announced to present the arrival of a stranger who asked to speak to the master. Berenguer, hooded and unrecognizable under grimy clothes, informed Juan of the death of D. Ramon, killed by him near his palace and after pocketing the promised sum, went to the port where he left for Genoa. The plan was perfect …… except that Juan made the mistake of bragging about it to her lover Florentina and she stripped of the privileges of being a lover of D. Ramon, far from concealing Juan, she denounces.

The news spread throughout the city and given the importance of the assassination, the matter will soon be politicized by competing families, leading to riots. Moreover, as no one in Valencia knew the perpetrator of the crime, the testimony of Florentina raised serious doubts and problems when sentencing. If the woman was telling the truth the problem was serious, could lead struggles between factions, they could not judge a noble like Juan de Pertusa if it insisted on his innocence having an alibi and gauging. It was a Royal Adviser who, weighing the possibilities, proposed to leave the final decision to Juan not knowing him it, so that, judged and sentenced, before being exposed to the gibbet, should be last questioned: “… If was found guilty by own declaration, must be immediately executed; but if insisted be innocent should be pardoned because no one be lying on the threshold of eternity … “. So, with this, to the Royal Authority it would be safeguarded. 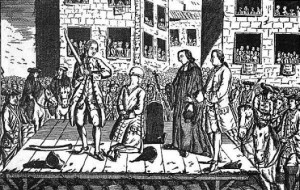 The day choose for the indictment a crowd filled the Market Square, once curious and eager to attend the execution of a noble; Juan de Pertusa reached the foot of the gallows on a discovered chariot buffeted and insulted by the crowd; trumpets sounded, silence felt down and judges, headed by a high priest who showed a great cross over his head, went to Juan asking: “Did you kill Don Ramon de Boil?” Juan replied arrogantly: “Yes, I did and the only thing I regret is having met the woman who led me to do it,” … he pointed to Florentina who watched the scene from the front row. Juan de Pertusa was executed amidst a strange silence and then, suddenly many voices were raised against her lover Florentina, who was finally beaten victim of an angry mob.

And that was how the Old Governor became into part not only in the history of Valencia as one of its most popular Governors, but as part of the Black City Chronicle. Today his grave, a beautiful double old Gothic grave, is shared with his son Ramon de Boil Montagut (died in Naples 1458, where he was Viceroy) in the Chapter House of the Convent of Santo Domingo de Valencia, which were protectors and benefactors.

This website uses cookies to improve your experience while you navigate through the website. Out of these, the cookies that are categorized as necessary are stored on your browser as they are essential for the working of basic functionalities of the website. We also use third-party cookies that help us analyze and understand how you use this website. These cookies will be stored in your browser only with your consent. You also have the option to opt-out of these cookies. But opting out of some of these cookies may affect your browsing experience.
Necessary Siempre activado
Necessary cookies are absolutely essential for the website to function properly. This category only includes cookies that ensures basic functionalities and security features of the website. These cookies do not store any personal information.
Non-necessary
Any cookies that may not be particularly necessary for the website to function and is used specifically to collect user personal data via analytics, ads, other embedded contents are termed as non-necessary cookies. It is mandatory to procure user consent prior to running these cookies on your website.
GUARDAR Y ACEPTAR